"Aladdin And His Wonderful Lamp" (1939) by Dave Fleischer - video dailymotion 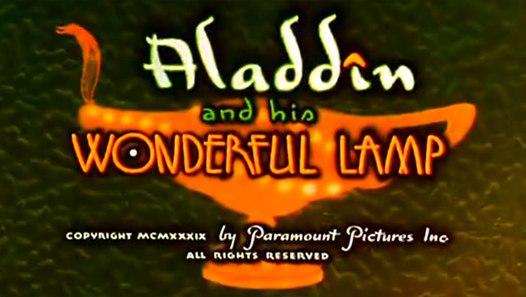 Aladdin and His Wonderful Lamp is a two-reel animated cartoon short subject in the Popeye Color Specials series, produced in Technicolor and released to theatres on April 7, 1939 by Paramount Pictures. It was produced by Max Fleischer, and directed by Dave Fleischer for Fleischer Studios, Inc., with David Tendlar serving as head animator, and music being supervised by Sammy Timberg. The voice of Popeye is performed by Jack Mercer, with Margie Hines as Olive Oyl and Carl Meyer as the evil vizier. Plot: This short features Olive as a screenwriter for Surprise Pictures ("if it's a good picture, it's a Surprise"), working on a treatment of the story of Aladdin that will feature herself as the beautiful princess and Popeye as Aladdin, all the while speaking in rhyme. As she types, her adaptation of Aladdin comes to life on the screen, with Popeye having to use his wits against an evil vizier who seeks to control a magic lamp inhabited by a powerful genie. After completing the script, Olive gets a termination of employment notice from the front office, which reads "Your story of Aladdin is being thrown out...and so are you! [signed] Surprise." As in many Popeye cartoons, many of the gags are conveyed using dialogue. As Princess Olive awaits Popeye/Aladdin's declaration of his love, he turns to the camera and remarks "I don't know what to say...I've never made love in Technicolor before!" During the climatic battle between Aladdin and the vizier, Olive screams out "Help! Popeye—I mean Aladdin—save me!!" Release and reception: This short was the last of the three Popeye Color Specials, which were, at over sixteen minutes each, three times(x) as long as a regular Popeye cartoon, and were often billed in theatres alongside or above the main feature. Unlike the first two films, Aladdin and His Wonderful Lamp is more Disney-esque in plot and pacing, and does not make use of the Fleischer Tabletop 3D background process. This Popeye Color Special is also the only one produced at the relocated Fleischer Studios location in Miami, Florida. Aladdin and His Wonderful Lamp takes some liberties with the source material. The 1992 Disney version of Aladdin took many of those same liberties, including simplifying the numbers of genies and removing Aladdin's family from the plot. Over twenty one minutes, Aladdin and His Wonderful Lamp is the longest entry in the series. Directed by Dave Fleischer Produced by Max Fleischer Voices by Jack Mercer, Margie Hines, Carl Meyer Music by Sammy Timberg Animation by David Tendlar, Nicholas Tafuri, William Sturm, Reuben Grossman Studio Fleischer Studios Distributed by Paramount Pictures Release date April 7, 1939 Color process Technicolor Running time 22 min (two reels) Language English Preceded byCustomers Wanted Followed by Leave Well Enough Alone